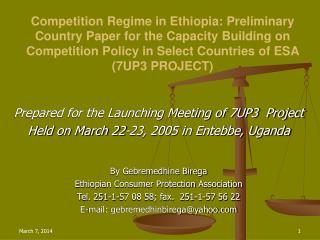 Competition Regime in Ethiopia: Preliminary Country Paper for the Capacity Building on Competition Policy in Select Countries of ESA (7UP3 PROJECT) Prepared for the Launching Meeting of 7UP3 Project Held on March 22-23, 2005 in Entebbe, Uganda By Gebremedhine Birega