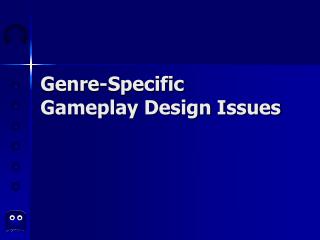 Genre-Specific Gameplay Design Issues Action Games The general idea is to keep the player moving and involved at all times. The most important skills for a player are hand-eye coordination and quick reflexes. Deep thinking is generally not required.

Genre-Specific Game Design Issues - . action games. the general idea is to keep the player moving and involved at all

GamePlay - . game idea development. the first question a player has to answer is…. do i play alone or with friends?

Gameplay - . mohammad zikky, m.t. abstract what makes a good game?. success or failure of a product depends mainly on how

Gameplay - . creating the experience. definition. choices, challenges, or consequences that players face while

Gameplay - . challenges and mechanics. gameplay is…. the core of the game. many argue that it is the most important

Gameplay - Or, where the fun comes from. gameplay. what is gameplay?. defined as consisting of the challenges and actions

Gameplay Channel - Hi, i'm max and welcome to viva max channel! if you like entertainment then you came to the right