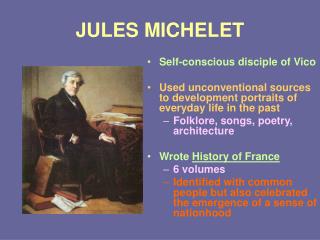 JULES MICHELET Self-conscious disciple of Vico Used unconventional sources to development portraits of everyday life in the past Folklore, songs, poetry, architecture Wrote History of France 6 volumes Identified with common people but also celebrated the emergence of a sense of nationhood

Jules Verne - . prime 8 unit 9 grammar. jules verne. what do you know about him? what was he famous for? what inventions