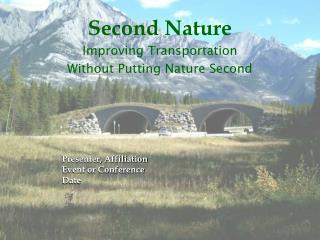 The Second Nature of Man. Human Being between Nature and Culture - Cosmos, nature, culture: a transdisciplinary

Some animals are born early, and acquire a “second nature” - . infants become speakers. of human languages, whose

second - 30. stat. second. (the closest answer wins). out of a world population of 7 billion how many people are

Nature of Human Nature - . part 1: motoring along on automatic pilot. abstract . psychology began as the science of

“ NATURE ” - . it ’ s more complicated than you think. the social construction of

Nature - . chapter 15. nature. overall the humanities have been positive toward nature, but some have been indifferent

Nature - . vs. nurture. which determines our behavior?. april lin psychology pd. 7. what is the nature/nurture

Nature - . nature - largely made of 2 things…. energy - the ability to produce heat or do work matter –

Nature - . this picture is very vivid and it shows all sides of a flower, which comes from nature. portrait. this is a