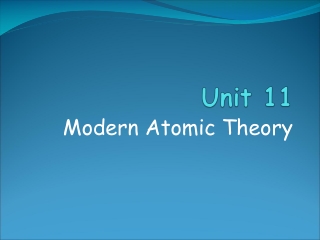 Unit 11. Modern Atomic Theory. Review of the Discovery of the Atom. 1803 John Dalton discovered that elements are made of atoms. He thought that atoms were solid, like a marble . 1875 Crooks discovered the electron. The electron was found to have a mass of

Unit 11 - . magnetism. magnets. magnetism – force of attraction or repulsion not all objects are affected by the force

Unit 11 - . oceans. engage. monday how does the ocean get salty? why are drainage systems a key part of making the ocean

Unit 11 - . the impact of diet on health . who am i ?. sarah taylor lecturer health and social care /area tutor

Unit 11 - . over the past 60 years, a reef island has grown out of the sea. typhoons destroyed the island of nadikdik

UNIT 11 - . the evolution of landforms. the main types of granite landforms. biology and geology 4. secondary