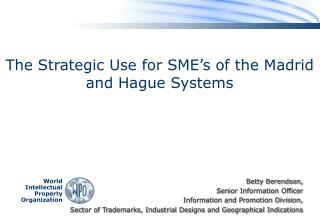 The Strategic Use for SME’s of the Madrid and Hague Systems. Betty Berendson, Senior Information Officer Information and Promotion Division, Sector of Trademarks, Industrial Designs and Geographical Indications. THE MADRID SYSTEM Objectives and Basic Features. Objectives of the System. The onus of proof in A cargo claim arts iii iv of the hague-visby rules and the uncitral draft convention - Overview. the

Value Creation and Strategic Information Systems - . what is added value and how can it be created by way of it-dependent

Madrid - . by esmee for ict. facts on madrid. madrid has been the capital of spain since the 17th century. the name