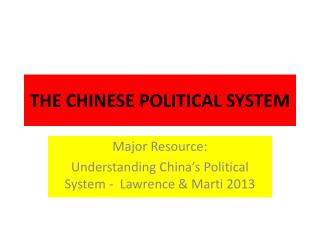 THE CHINESE POLITICAL SYSTEM. Major Resource: Understanding China’s Political System - Lawrence & Marti 2013. All notes in this powerpoint presentation are based on the above document published by the Congressional Research Service (USA) in 2013. . P22. Politburo Standing Committee (PSC).

People’s Republic of China - . role of political parties. china is the most populous country in the world, and ruled by

China - . background information. the people’s republic of china was established on the 1st october 1949 population:

Structure of the Party-State - . from top to bottom, chinese politics has changed noticeably since the maoist