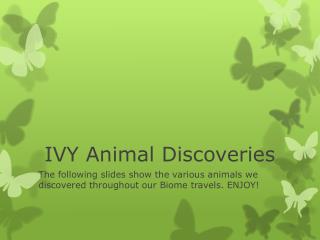 IVY Animal Discoveries. The following slides show the various animals we discovered throughout our Biome travels. ENJOY!. The Festus!. `. Nothing compares with the Festus's COOLNESS!. There prey is anything!. The festus chart of adaptations. Plant and Animal Cells - . by: mcnutt &amp; brown. essential questions. what are the basic cell parts? what is the