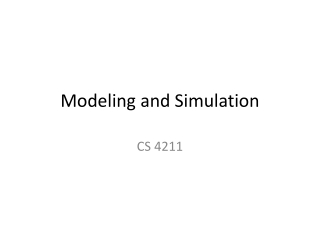 Modeling and Simulation - . wireless communication networks. scale. a common issue how accurate do you need? what are you

Simulation and modeling - . presented by vidya sivakumar. a discipline of designing a model of actual or theoretical

Simulation Modeling - . imitation of the operation of a real-world process or system over time objective: to collect data

Simulation Modeling - . learning objectives. after completing this chapter, students will be able to:. tacke a wide

SE207: Modeling and Simulation - . general instructions. objectives. to be able to do simulate systems of various types