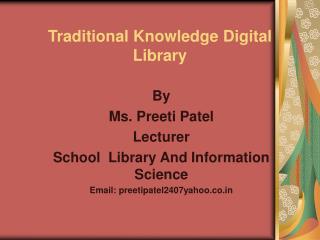 Traditional Knowledge - . basic system of local decisions specific and not universal transmitted orally or by

TRADITIONAL ECOLOGICAL KNOWLEDGE - . “traditional knowledge is complementary to western science, not a replacement for

Merging Electronic and Digital Resources with Traditional Library Collections - . cataloging, metadata, and next

Digital Library - . jennifer mchgugh. my digital library will include images of my own art work. all of the images were

The California Digital Library and the Public Knowledge Project - . transformative models of coordinated development and