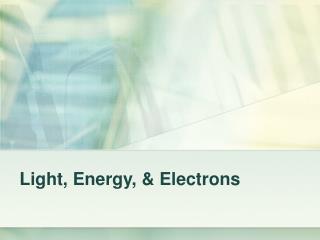 WAVES &amp; LIGHT - Unit 5 waves &amp; light what is a wave? a wave is a disturbance that transmits energy

Lewis Dot Structures of Covalent Compounds - . atoms are made up of protons, neutrons, and electrons. the protons and

Physics - . light and geometric optics . what is light?. if you had an alien friend come visit you on earth, how would

Electricity and Magnetism - . 5/23 static electricity notes. iq: name the particles of an atom. which particles can move

Electrons and Periodicity - . history of atomic theory calculating wavelength, frequency, and energy history of the

Electricity - . chapter 6. fiat lux! (then there was light!). the generator, battery, or power pack supplies the

Introduction to Light - . electro-magnetic radiation. today, we will look at…. what is light? from where does light

Light and Temperature - . astronomy: the science of seeing. goals. what is light? what are the types of light? where does