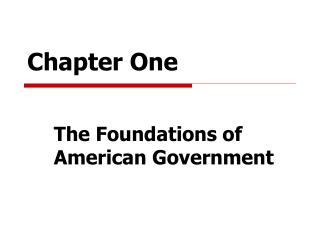 Chapter One. The Foundations of American Government. What is Politics?. Process of resolving conflicts and deciding, as Harold Laswell put it, “who gets what, when, and how”

Chapter One - . working safely in the shop. objectives. understand the importance of safety and accident prevention in