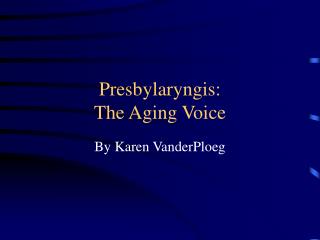 Presbylaryngis: The Aging Voice. By Karen VanderPloeg. Prevalence/Age of Onset. The San Diego Center for Voice and Swallowing Disorders: 72% of people over 40 years of age have some degree of vocal fold bowing. Stemple, Glaze, & Klaben (2000): Presbylaryngis begins around 65 years old.

Anti-Aging and skin care tips and treatment - Most of people are facing aging problem. here are some tips that will be

Voice over IP Protocols - . an overview. what is in this module. module title: voice over ip protocol – an overview.

A Voice for Animals - . animals don’t have a voice, so they cant speak out about the horrifying treatment in shelters.

Aging Changes in the Senses - . what are the 5 senses?. t aste smell touch vision