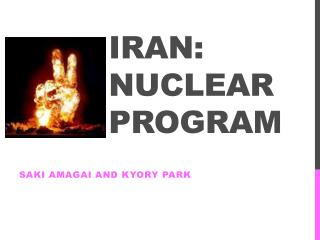 Iran: nuclear program. Saki Amagai and Kyory park. What’s the problem?. Iran has been concealing its major uranium enrichment program for many years. AND Iran is not trying to stop its enrichment-related activities as required by the UN security council. Unit 7 - . departure. about the author. nahid rachlin , born in iran, came to the united states to attend college and

Southwest Asia North Africa - . by: eleanor joyce city of salem schools. how many places can you identify?. saudi arabia,

India, Iran and the NPT - . abdi sami maciej dakowicz. where are we on the way to nuclear abolition?. david c hall md