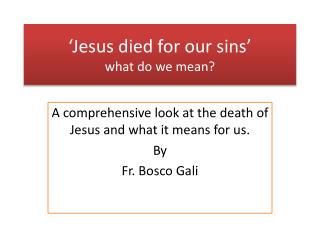 THE CRUSADES - . a quest for the holy land. crusades. a long series or wars between christians and muslims they fought

Christ in the Books of the Bible - . a brief overview of the bible dr. gary c. woods. the bible portrays jesus christ as

“COURSE “THE FAITH OF JESUS ” - . lesson 4. what the bible teaches about the second coming of jesus christ. ... a