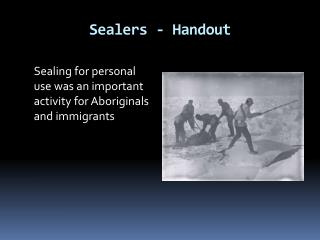 Sealers - Handout. Sealing for personal use was an important activity for Aboriginals and immigrants. In the late nineteenth century sealing became a big industry using bigger and bigger ships. It is now a much smaller industry which takes about 200 000 to 250 000 seals a year.

USE this PP with the Handout Revise the timeline Handout to match this better - Pull / watch your kkk tape – re: using

BIOLOGY KEYSTONE REVIEW - . use this powerpoint presentation to complete your viewing guide handout per topic. at the end

Salvete ! Welcome to Latin 2 - . 9/9/13. propositum : dwbat identify the basic goals and structure of their latin course

Captain James Cook - . and the discovery of australia. about cook. captain james cook was born on the 27 th of october