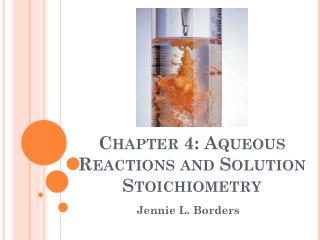 Chapter 4: Aqueous Reactions and Solution Stoichiometry. Jennie L. Borders. Section 4.1 – General Properties of Aqueous Solutions. A solution is a homogeneous mixture of two or more substances. A solution in which water is the dissolving medium is called an aqueous solution. Chemical Reactions and the Environment - . ch 8. key concepts in chapter 8. how different factors change the rates of

6. An Overview of Organic Reactions - . why this chapter?. to understand organic and/or biochemistry, it is necessary to

SOLUTIONS - . solutions. solution – a homogeneous mixture of pure substances (occur in all phases, but we will focus on

Chapter 4 Alcohols and Alkyl Halides - . overview of chapter. this chapter introduces chemical reactions and their