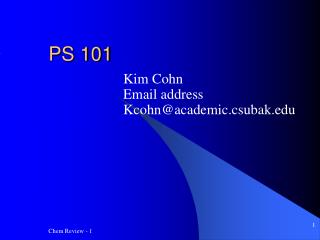 PS 101. Kim Cohn Email address Kcohn@academic.csubak.edu. 2 nd Grade Standards. The motion of objects can be observed and measured. As a basis for understanding this concept: PS 101 - . kim cohn email address kcohn@academic.csubak.edu. how to obtain slides. a cd-r disc can be checked out

PS- 1.3 - . scientific measurements. bad joke…. why did the bottle insist on being at the front of the shelf?.