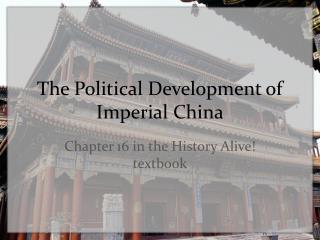 The Political Development of Imperial China The Political Development of Imperial China. Chapter 16 in the History Alive! textbook. 16.1 Introduction. Chinese history is divided into periods ruled by dynasties, or ruling families China was first unified under an emperor in the third century B.C.E.

The Political Development of Imperial China

Xia,Shang,Zhou Lamb - . what are dynasties?. a dynasty is a series of rulers from the same family. historically, royal

Imperial China Collapses Ch. 14.3 - . after the fall of the qing dynasty, nationalist and communist movements struggle

FEUDAL JAPAN - . essential question : what were the characteristics and causes of japanese feudalism?. part i: early

REUNIFICATION AND RENAISSANCE IN CHINESE CIVILIZATION - . chapter 12 the era of the tang and song dynasties. 220 end of

The Ming and Qing Dynasties - . in this lesson, students will be able to define the following terms: ming dynasty