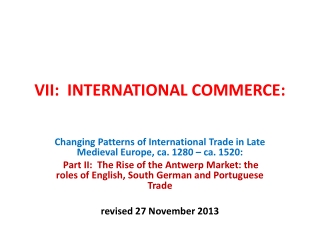 The International Nature of Electronic Commerce - . any business that engages in electronic commerce instantly becomes an

Electronic Commerce Systems (e-commerce) - . note: project b is could be considered a “baby” e-commerce system

“Why E-Commerce is Like a Bottle of Tylenol” - . professor peter p. swire ohio state law school conference on new

What is E-Commerce? - . e-commerce (electronic commerce) is the buying and selling of goods and services on the internet.

AA ICC. International Chamber of commerce. ( Work individually) - The aim of this activity is that you start to get