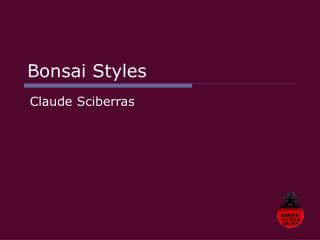 Bonsai Styles. Claude Sciberras. Why Styles?. There are several reasons for identifying a bonsai by a named style: Naming a style provides a graphic description of the tree. BONSAI - . history of bonsai. the correct pronuciation is bonsai (bone-sigh ), not to be confused with banzai on karate

BONSAI - . • if you shut your eyes and imagine what you can hold in your hands there would be thousands of

Cascade-Style Bonsai - . claude sciberras. why do we use styles?. there are several reasons for identifying a bonsai by a

Basic Information about Bonsai - Materials that are needed for maintenance of bonsai trees include the farmer’s knife,

Bonsai School of Victoria - . courses and workshops. what the bonsai school of victoria will offer you. over 50 years

Futsal systems and styles - . definition initial position of players you need to establish a basic organization between