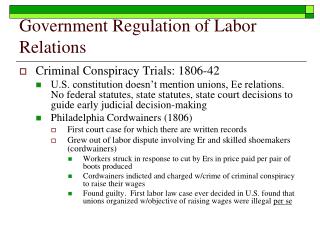 Labor Relations - . unit 4. labor issues. vicarious liability: one party is responsible for the actions of another

Labor Relations - . test your labor relations know-how. 1. an auto mechanic applied for a job with an automotive

Labor Relations Law - . by ryan glock, kirsten, and brady. what is labor relations laws?. this is a group of laws to

COMPARATIVE LABOR RELATIONS - . note the sometimes great differences with the u.s. system: but also similarities around:

LABOR RELATIONS - REGIONALLY - . grievances the region has a total of 50 pending disciplinary cases grievances pending in