“You should be a math major!” - PowerPoint PPT Presentation 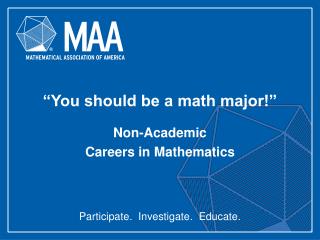 “You should be a math major!” “You should be a math major!”. Non-Academic Careers in Mathematics. Math majors. High school math teachers College & university math faculty (teachers, researchers) What about non-academic careers for math majors?. Raytheon…. A defense and aerospace systems company Who works there?

“You should be a math major!”

The major objectives - . i. why math is needed in the kitchen? ii. handouts, books, and posters. iii. find the amount

Math Games and Activities to Help You Teach Your Child Math - Http://coolmathgames4u.com/math-game/ for many children,

Research-Based Math Interventions for Students with Disabilities - Math is right up there with snakes, public speaking,

St. Lucie Math Routine - . july 2011. goals for today. math initiatives. the purpose of the math task force was to review