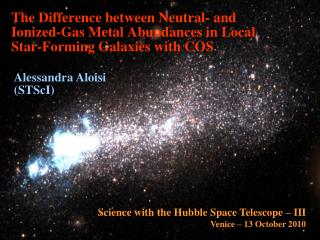 The Difference between Neutral- and Ionized-Gas Metal Abundances in Local Star-Forming Galaxies with COS. Alessandra Aloisi ( STScI). Science with the Hubble Space Telescope – III Venice – 13 October 2010.

M82 - . a study of the galaxies starburst nature and composition. credit: nasa , esa and the hubble heritage team stsci

SNAP Introduction - . supernova data shows an acceleration of the expansion, implying that the universe is dominated by a

GALAXIES - . there are three main classes (as classified by hubble). a. spiral b. elliptical c. irregular. 1. spiral

Galaxies - . a huge cluster of stars , dust, and gas held together by gravity can be 100,000 light years from end to end

X-ray Sources in Nearby Galaxies - . q. daniel wang university of massachusetts. why x-rays?. energetic heating and