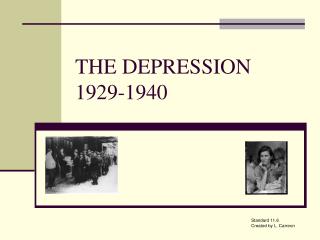 THE DEPRESSION 1929-1940. STANDARD 11.6. Students analyze the different explanations for the Great Depression and how the New Deal fundamentally changed the role of the federal government. ECONOMIC ISSUES. PART I. THE POSTWAR ECONOMIC BOOM. The Great Depression 1929-1941 - . in washington state. stocks crashed as well, but the effect wasnâ€™t felt until