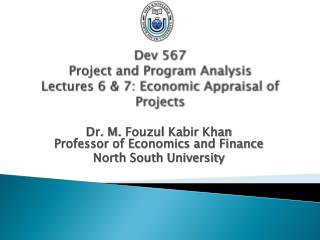 Lectures 6-7 Production of ammonia - . synthetic ammonia (nh 3 ) has become the principal source of all nitrogen

Project Appraisal - . dr.s. sreenivasa murthy. what is a project ?. a project is a proposal for capital investment to

Lectures 6&amp;7 - . what will i learn in this lecture?. dynamics, two examples of the use of ode45 . numeric