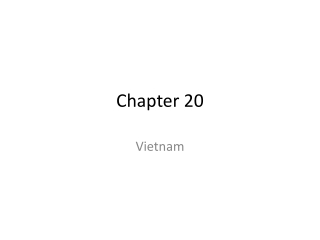 Chapter 20. Vietnam. Chapter Introduction. This chapter will identify how the United States confronted communism in Southeast Asia. The chapter reviews the origins of the Vietnam War and the increasing American military involvement in Vietnam. It also discusses opposition to the war.