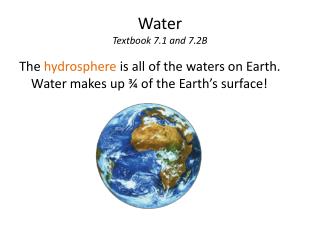 Water Textbook 7.1 and 7.2B. The hydrosphere is all of the waters on Earth. Water makes up ¾ of the Earth’s surface!. 2 Types of Water. 1 - Salt Water Areas that have high salinity (measure of how salty water is). Ocean Temperatures. Temperatures range from 30  C to -2  C Today’s Agenda: Lecture I - . journal questions: describe three characteristics of water. what is the water cycle? *1.

Ice - You can go skating on ice, and that can be fun. but what is ice? ice is very, very cold water! water is made up of