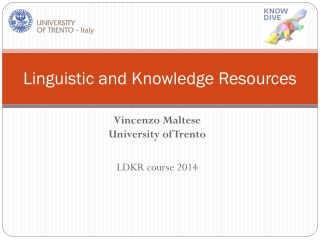 Language and Linguistic Knowledge - . what is language?. any system of linguistic symbols used in a generally

Linguistic Knowledge - Introduction - . 37-445-01 the acquisition of morphology and syntax dr. sharon armon-lotem. what

Knowledge Resources - Promoting health in nottingham: the contribution of the pct library service in partnership with

The nature of linguistic knowledge - . mark liberman university of pennsylvania. a framing story. the place: lsa 2008 in

Linguistic knowledge for Speech recognition - . by : ahmed aly 06/05/2013. project description. the main goal of this

LIRICS Linguistic Infrastructure for Interoperable Resources and Systems - . ►presentation of actual work on

Knowledge Management: Common and Critical resources - . survey questions and answers for the 4th conference of ombuds and