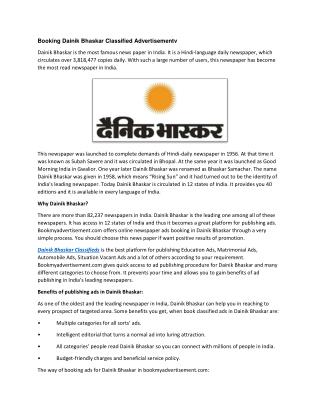 Dainik Bhaskar is the most famous news paper in India. It is a Hindi-language daily newspaper, which circulates over 3,818,477 copies daily. With such a large number of users, this newspaper has become the most read newspaper in India.

This newspaper was launched to complete demands of Hindi-daily newspaper in 1956. At that time it was known as Subah Savere and it was circulated in Bhopal. At the same year it was launched as Good Morning India in Gwalior. One year later Dainik Bhaskar was renamed as Bhaskar Samachar. The name Dainik Bhaskar was given in 1958, which means “Rising Sun” and it had turned out to be the identity of India’s leading newspaper. Today Dainik Bhaskar is circulated in 12 states of India. It provides you 40 editions and it is available in every language of India. Dainik Bhaskar Newspaper Advertisement Online - With the help of releasemyad, you can now book your ads in dainik bhaskar