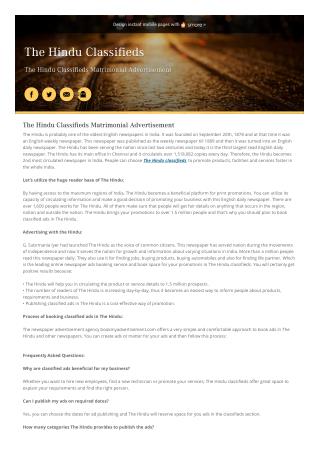 The Hindu is probably one of the oldest English newspapers in India. It was founded on September 20th, 1878 and at that time it was an English weekly newspaper. This newspaper was published as the weekly newspaper till 1889 and then it was turned into an English daily newspaper. The Hindu has been serving the nation since last two centuries and today it is the third largest read English daily newspaper. The Hindu has its main office in Chennai and it circulatels over 1,518,082 copies every day. Therefore, the Hindu becomes 2nd most circulated newspaper in India. People can choose The Hindu classifieds to promote products, facilities and services faster in the whole India. Creative and Brilliant Advertisements - Advertising is how a company encourages people to buy their products, services or

Grief and Loss in the Indian Culture and Hindu Religion - . by: britney faulkner. interview. interview with a 26 year old

Do you take prayer… PERSONALLY? - . sharing our faith with those of other faiths …. other faiths and ideologies to be

The role of Hindu Dharma &amp; Our role in Hindu Dharma - . outline: introduction of the topic and participants hindu