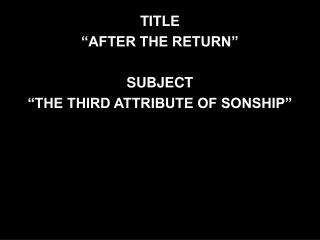 TITLE “AFTER THE RETURN” SUBJECT “THE THIRD ATTRIBUTE OF SONSHIP”. SEVENTH SEAL JEFF IN 63-0324E Return of the Cicadas

The Return of the State - . the state. behavioralists either dissolved the state in a multiplicity of agencies and

The Attribute and the ecosystem - . topics. basics common schema loa of attributes privacy naming complexity and

The Return of Agamemnon - . orestes and his friend pylades find iphigenia still alive and serving the temple of artemis

The Return Of Christ - . titus 2:13. introduction. a faithful christian has the privilege of looking forward with happy

The Return of the King - The 1 st adam surrendered the rule of the world to the power of evil. every human heart now

“ Our Return After the Rapture” - . “armageddon after the rapture” revelation 16:15 behold, i come as a thief.

Return of the Rangers - . excerpt from the historical novel northwest passage by kenneth

The subject - When people talk about this painting, they immediately use the word &quot;luminescent,&quot;

The Subject - . definitions. the subject. subject. a noun phrase functioning as one of the main components of a clause,