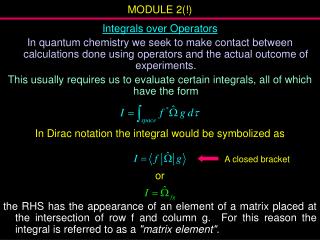 MODULE 2(!). Integrals over Operators In quantum chemistry we seek to make contact between calculations done using operators and the actual outcome of experiments. This usually requires us to evaluate certain integrals, all of which have the form G REAT B ATTLES OF THE A MERICA C IVIL W AR Module 6: Line of Sight - . with russ gifford. gbacw line of sight. goals for

Learning Outcome: By the end of the lesson we will be able to discuss the expectations of the examiner for this module.

Module 2: - . risk factors and prevention. tobacco use alcohol use age over 40. major risk factors for oral cancer are:.