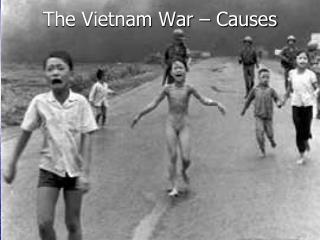 The Vietnam War – Causes. Background: How did the USA first get involved in Vietnam?. Vietnam is in South-East Asia. It was part of an old French Colony called Indo-China During WW2 the Japanese captured it from the French The Vietnamese resistance was led by the communist Ho Chi Minh (left) Where is Vietnam? - . history. conflict between france &amp; vietnam. the vietnam war grew out of the long conflict

The Vietnam war - . i mean the vietnam conflict, excuse me not war!. teaching the vietnam experience. by tony miller.