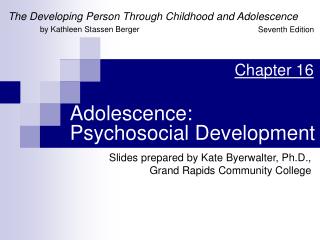 Professional Development - . “preparing for the next level”. “professional development is the planned, progressive

Erik Erikson (1902-1994) - . &quot; the personality is engaged with the hazards of existence continuously, even as

Chapter 12: Adolescence - . module 5 social and personality development in adolescence. identity: asking “who am i?”.

Chapter 10 - . psychosocial development in middle childhood. self concept around 7-8, begins development of