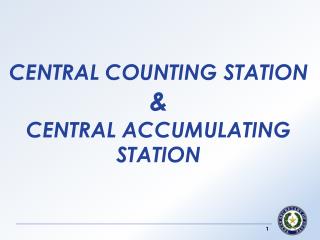 CENTRAL COUNTING STATION & CENTRAL ACCUMULATING STATION. LEGAL AUTHORITY. ALL LEGAL CITES ARE FROM THE TEXAS ELECTION CODE , UNLESS STATED OTHERWISE. What is Central Counting Station (CCS)?. On election night, this is the place where CENTRAL LINES AND ARTERIAL LINES - . sharon harvey 26/01/04. learning outcomes the student should be able to:-. identify

Bonding Lab - . wrapping things up. checking results: station 5 check below- your solutions may have been contaminated!.

Science Station - . review of unit 5 a plant and its parts. welcome. today we will review all of the information we

Central Place Theory - . written by walter christaller a central place can be any place to which people travel to make