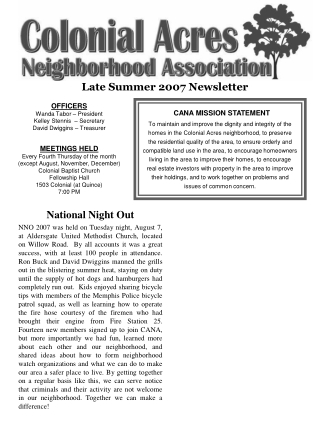 PROSSER JROTC SUMMER NEWSLETTER - . to start off their summer, some of the cadets were given the opportunity to go to

Newsletter: Summer 2006 autumnridge - Pool committee . as we all have seen, there is a spring under the pool area that

Late Summer Gardening Tips - Months of sun exposure, foot traffic and pest activity can take a toll on your lawn, and

Summer 2007 - . stratfor intern training. brought to you by the writers group. what is a

Ethical-Times-Summer-Newsletter-2013 - Ethical forestry specializes in sustainable development of forests. it grows and

Late Summer Annual Garden Tips - Now is a great time to look around and see where “blank” in the garden is; to see

Late Summer Annual LawnCare Tips - Sometimes, when we come to the end of a long and warm summer, it seems that nothing is

Late Summer Lawn Care Tips - When there is no protective coating layer, the surface of the soil is cracked and hard coat,

Late Summer Lawn Care Tips - Bluegrass lawns are usually at a height of 3 cm cut during the hot and stressful summer.

Late Summer Lawn Care Tips - Heck grass beds need at least a centimeter of water per week, and more if heat is severe.

Late summer lawn care tips - Now is a great time to look around and see where “blank” in the garden is; to see how

EARTH Summer 2007 - . day 1: intro to why we are starting with this activity and into long term semester project,