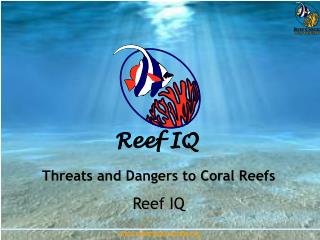 Threats and Dangers to Coral Reefs Reef IQ. New Vocabulary. New vocabulary will be highlighted in green . Please write down each new word for review at the end of the class. What is a coral?. Each one of these is an individual coral polyp. A plant or an animal? Coral is an animal! Threats to Coral Reefs - . natural and human. threats from nature. unusually strong waves such as those from a hurricane

THREATS TO THE CORAL OF THE MESOAMERICAN REEF - . nicole grainger. the mesoamerican reef. 225 million years 1 000

Coral Reefs - . by:aya. where is it located in the world?. the red shows where the coral reef is located on the world. .

Coral Reefs - . diversity. diversity: the degree of variation of life forms within a given ecosystem, biome, or an

Coral Reefs - . what is a coral reef, exactly?. coral reefs are underwater structures formed by calcium carbonate which

Coral Reefs - . 4g2 – global environments year geography 2013. “the rainforests of the sea” we need to study the

Coral Reefs - . location of reefs. found between 30°north and 30°south reason: coral reefs do not thrive in areas where

Coral reefs - . by tom h arvey. where coral reefs are found. the largest barrier reef is in australia the second largest

CORAL REEFS - . references: dr.tim flannery – we are the weather makers (2007 australian of the year and scientist at

Coral Reefs - . the great barrier reef. largest coral reef in the world ... coral reef. matter and energy in an

Coral Reefs - . what are coral