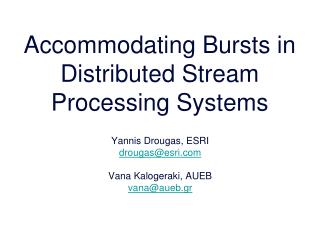 Synchronization in Distributed Systems - . in a single cpu system, critical regions, mutual exclusion and other

Distributed Query Processing - . based on “the state of the art in distributed query processing” donald kossman (acm

Distributed Transaction Processing - . some of the slides have been borrowed from courses taught at stanford, berkeley,