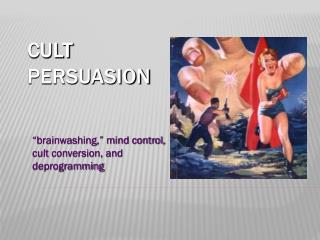 Shincheonji Cult - Read books or magazines those are about shincheonji cult at https://nhne.tvr r to summarize, here's

Cult Killings - . higgins o’brien spring 2012. the authors define a cult as a “loosely structured and unconventional

Persuasion - . persuasion (noun): the act of causing people to do or believe something. ex. most teenagers don’t need

Persuasion - The introduction: the purpose. the introductory paragraph introduces the argument of your paper. immediately