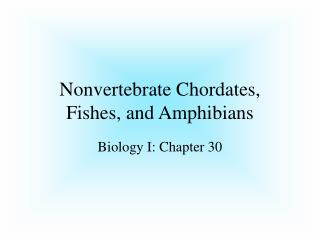 Chapter 8 - . marine fishes. the first vertebrates. fishes appeared more than 500 million years ago evolved from an

Phylum Chordata - . a tribute to the diversity we know. introduction. members of the phylum chordata include animals with

REPTILES &amp; AMPHIBIANS - . the rise of amphibians (devonian period) a. amphibians have a body plan and mode

Amphibians - . animals with a double life. primary characteristic. amphibians have a completely aquatic larvae which