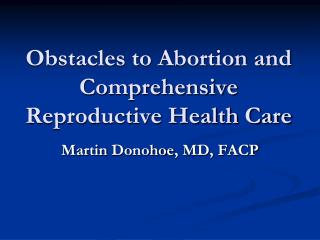 Obstacles to Abortion and Comprehensive Reproductive Health Care. Martin Donohoe , MD, FACP. Fertility. Without contraception, the chance for a successful pregnancy is: 25% within the first month 85% by the end of the first year At least 1/5 pregnancies ends in miscarriage Health Care, the 2008 Presidential Election and Obstacles to Reform - . prepared for: by gary a. ferguson, senior vice

ABORTION - . by: taylor graves. abortion should not be used because it destroys lives. abortion. is the intentional

Health and Reproductive Rights - . medical institutions. provide service based on insurance coverage and ability to pay