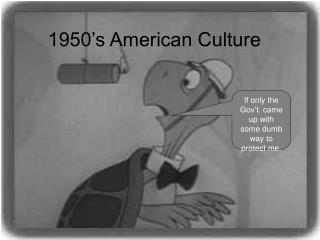 American Culture in the 1950’s - . presentation by adam turner. why was the decade so important?. you should walk away

1950’s - . ap us history. the “fabulous fifties!”. what are the first thing that comes to mind when you think of

1950’s - . culture and significant events in the united states. from our stations yesterday…. what do you remember?

American music and musicans from 1950´s onwards - . warm up questions. do you ever listen to american music? which of

1950’s - . by: jasmine, jessica, danielle &amp; shakyra. growth of suburbs. most people resorted to homes outside