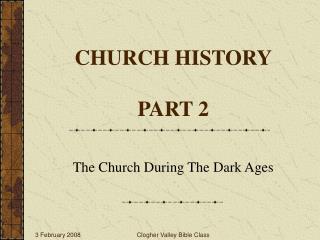 CHURCH HISTORY PART 2. The Church During The Dark Ages. The Struggle For Power. The Dark Ages were dominated by the lust of the Papacy for control over the Kings of Europe. This created a corrupt church which had little desire for spirituality. CHURCH HISTORY PART 4 - . the reformation in great britain. the english reformation. the revival of the bible. william

Church History Part -3 - . the debate over the eucharist (&amp; other sacraments). transubstantiation (catholic

THE CHURCH (part 2) - . “upon this rock i will build my church; and the gates of hades sill not overpower it” (matt.

CHURCH HISTORY II Lesson 16 Scottish Puritanism PART 2 - . puritanism: part 2. “the haunting fear that someone might be

CHURCH HISTORY II Lesson 3 Martin Luther, Part 2 - . “human life without the knowledge of history is nothing other than

CHURCH HISTORY II Lesson 2 Martin Luther, Part 1: The Church is Shaken - . “every man must do two things alone; he must

Church History - . definition of church history. for purposes of this course, term used in broadest sense: the scholarly

Church History - . part i: pentecost to the western schism. the jesus movement. the “twelve” his “bothers”

Church History - . the twelve. the rationalist. my lord and my god. a dutch wall painting showing habban with

Church History - . the protestant reformation part 1 1516-1563. points to ponder. what events led to the reformation? who