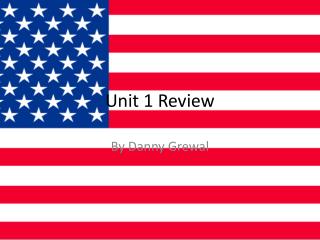 Unit 1 Review. By Danny Grewal. Definitions. Imperialism – is the domination of one group over another Open door policy - is a policy that was created so that western countries can trade with china. Unit 1 Review - . 11 open religion test = tomorrow!. what is religious impulse?. when someone does not believe in god a

UNIT 1 REVIEW - . ancient civilizations. what is ad?. anno domini in the year of our lord jesus christ. what is a

Unit 1 Review - . what is the study of the relationship between living organisms and their environment?. ecology. what

Unit 1 Review - . terms and applications. terminology of philosophy. philosophy —the study of truth in all its various

Unit 1 Review - . 1. to say that learning has taken place, we must observe a change in a subject’s behavior. what two

Unit 1 Review - . this is a short review for the upcoming unit 1 test. run through this game a few times to make sure you

Unit 1 Review - . 1. which group of colonies had small farms that raised cattle and grew grain crops . a. northern b.