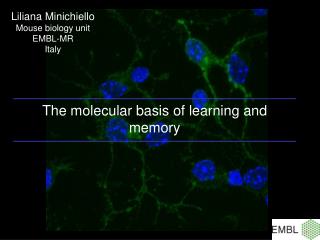 Liliana Minichiello Mouse biology unit EMBL-MR Italy. The molecular basis of learning and memory. How do we perceive the outside world?. In the 1760's, the famous philosopher Immanuel Kant proposed that our knowledge of the outside world depends on our modes of perception.