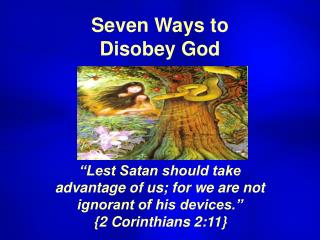 Seven Ways to Disobey God. “Lest Satan should take advantage of us; for we are not ignorant of his devices.” {2 Corinthians 2:11}. Introduction. The negative approach-- failure to submit to God’s will. Seven Ways To Introduce Keto Gedeon - Keto gedeonu00a0:- in the wake of using this supplement, you'll have the

SEVEN best ways to connect to your audience - Remember, people, come to social media to socialize. they also need to be

Seven Ways To Secure Your It Environment - It infrastructure refers to the composite hardware, software, network

Five Ways to Uncover God Stories - . 1. pay attention when others are telling good stories . 2. notice the stories that

Seven Ways To Introduce Affordable SEO Los Angeles - The appropriate response is, through affordable seo. trust it or

Seven Brilliant Ways To Advertise check it out. - Choosing modular cable solutions for the information centre most