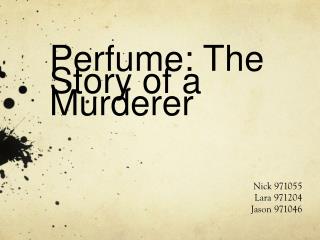 Selling Smart: A story of two sales experts - A story about the traditional seller and the social seller. at the end of

“The Story of an Hour” by Kate Chopin - . analysis and discussions. pre-reading discussion. what can we do in an

Story Elements - . characters. a dynamic character is one who goes through a personality change due to the events in the

Somebody Wanted But So - . purpose: this reading strategy helps students write a well-developed summary of the story.

Perfume Part one - . patrick suskind. age of reason or the enlightenment. a period of time where science ruled –

Miss Nelson is Missing - . by: james marshall. what we want to learn. content objective: i will make inferences about the

“ The Cask of Amontillado ” - . background for poe ’ s short story. edgar allan poe. author, not the narrator, of

The History Of Programming Languages - . spring 2012. prehistory of programming languages the story of the programmers of

VCOP Games - . story openers. write 5 different sentences that could open a story and grip the reader. eg. “ stop, or i