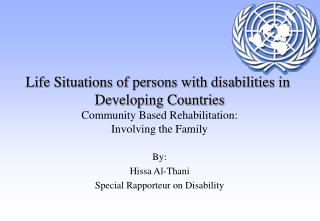 Life Situations of persons with disabilities in Developing Countries Community Based Rehabilitation: Involving the Family. By: Hissa Al-Thani Special Rapporteur on Disability. Why So Many Are Not Succeeding? Are We Missing the Learning Disability? - . glenn young learning disabilities consultant

Accommodating Students with Special Dietary Needs - . schools must make substitutions in the reimbursable meal for

Special Education: Basics+Beyond - . unique alliance of people with disabilities and parents of children with

Eye Disability Rating - . fall conference 2009 steve heye / jim sampson. what is important for me as a cso to know. va

Disability Equality Scheme (DES) - . the following presentation has been adapted from the training for leicestershire