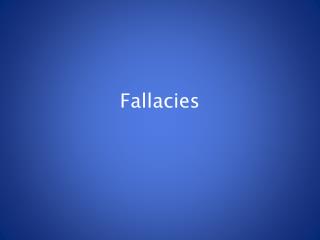 Fallacies. What is wrong with the following sentences?. I love Disneyland because I’m always happy there. Everyone on the team wears Nike shoes; it’s the only way to go! I love music, therefore I love the Jonas Brothers. Objective. Fallacies - . it’s not useful to think of ‘ fallacies’ as a laundry list of forms to avoid, or as an algorithm for

Fallacies… - . …and how to avoid them!. arguments. most academic writing tasks require you to make an argument—that

Fallacies - . chapters 8 &amp; 9. deductive reasoning . from general to specific; have a law, premise, or principle

Fallacies - . ad hominem. definition: arising or appealing to emotions &amp; not to reason or

Fallacies - . steve wood tccc. definition. a fallacy is an error in thinking, logic, or argumentation. to create an

Fallacies - Arguments . most academic writing tasks require you to make an argumentthat is, to present reasons for a